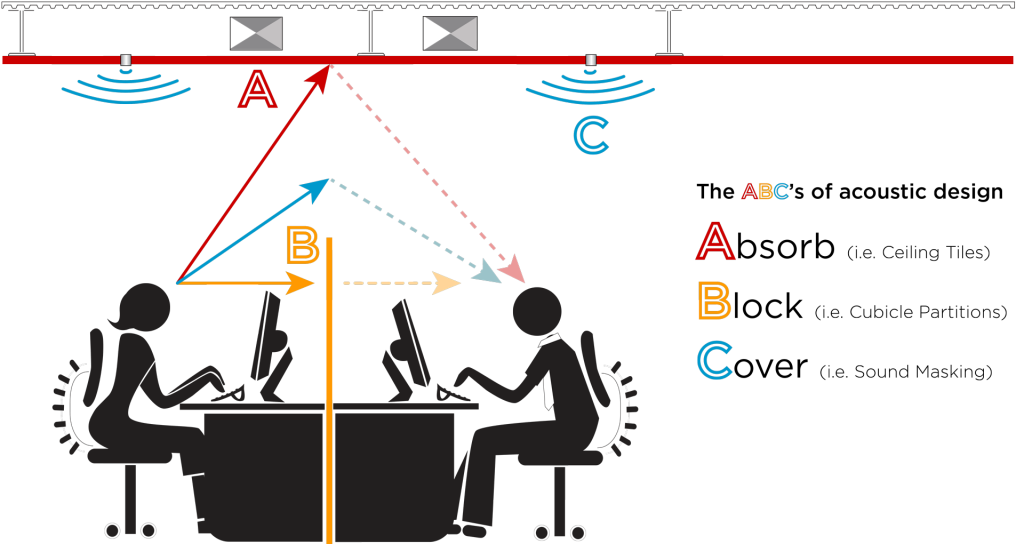 What is sound masking?

Sound masking is the “cover” portion of the equation. Sound masking is the addition of an unobtrusive background sound, similar to airflow, to reduce the intelligibility of human speech and reduce distractions. The resulting environment leads to greater productivity and increased privacy and comfort.

Speech Privacy is the inability of an unintentional listener to understand someone’s words. The higher the privacy index, the more confidential the speaker’s conversation becomes. When someone’s conversation is clearly understood, the speech becomes a distraction and the speaker has less privacy. With the addition of Qt sound masking, the speaker’s voice becomes less intelligible. Their voice becomes less of a distraction and their privacy increases.

Imagine looking up at the stars on a clear night:

This works the same for human speech. As the ambient sound in the room increases, it become more challenging to discern an individual’s conversation from across the room. This inability to understand the conversation reduces distractions and increases the speaker’s speech privacy.

What is Qt Quiet Technology™ and why would I choose to install sound masking versus other acoustic treatments?

What is the difference between a traditional and Qt Quiet Technology sound masking system?

Traditional sound masking systems, known as “in-plenum,” use large paint can-like loudspeakers installed above the ceiling tiles. Sound is bounced off the ceiling deck, through the ceiling material into the work space below. The sound from these systems can be unpredictable and create “hot” and “cold” spots. Masking sound can easily overflow into undesired spaces. In-plenum systems require significant design, installation and tuning time because there are many unknowns above the ceiling. If no ceiling exists, there is no plenum for traditional systems to operate within, significantly impacting performance. Additionally, these systems require significantly more power to operate than a Qt system.

With the direct field approach to sound masking, the Qt™ system uniformly disperses the masking sound into the space and eliminates masking sound overflow into undesired areas. The pre-tuned masking sound is emitted through four sequenced channels that eliminate acoustic interference. Additionally, our Qt™ systems deliver more energy in the octave bands that are related to speech, resulting in a more energy efficient system that successfully masks speech at lower volume levels.

How effective is sound masking?

Increased Privacy  In a laboratory study between 2006 and 2008, researchers found that the addition of sound masking increased speech privacy from 35% to 90%.

Increased Performance  Researchers found that study participants had a nearly 10% improvement in their ability to recollect a series of numbers and words after the addition of sound masking.

Increased Productivity  In a 2008 survey, researchers found that workers lost an average of 21.5 minutes each day to conversational distractions.